To contact a member of the Elders, please email them directly at elders@littlerockchurch.org.

Brad has served as a House Church Leader, Worship leader, Adult Class Teacher, and volunteer with the Youth and Men’s Ministries. Mary Lee is a gifted Bible teacher, having taught children’s classes. She has co-led as House Church Leader and is involved in the Women’s Ministry. She has also sung on the worship team and help arrange music. Brad and Mary Lee and have four adult children. They have been at Little Rock Church since it began in 1986. “We love this church family. It’s a great place to grow in the Lord and to become more like Jesus Christ!”

Stacy and Kathy Peters have been married since 1975. They have three children, all married, and five grandchildren. Stacy was a worship leader at Little Rock Church for many years and still serves in the Worship Ministry; he teaches adult classes at LRC from time to time. Kathy has served in the Children’s Ministry for many years. Stacy says of Little Rock Church, “These people have taught me how to be a man, how to be a husband, how to be a dad, and how to be a Christian. There’s not a better place in the world to raise a family.” Both Stacy and Kathy have served at LRC since its formation.

Scott and Ashley have been married since 1990 and have three children. Scott has served as a house church leader, has worked with the youth group, taught classes and serves on the preaching team. Ashley has served in a teaching role for many years and as a mentor in the women’s ministry. They have both been involved with LRC for close to 30 years.

Jerry and Pam Reed met and married in Pine Bluff, AR. Jerry works as an engineer for Entergy Arkansas and has done so for many years. They have 3 children – all grown. Their son Matt is a member of LRC. Pam works on staff at Little Rock Church as the financial adminstrative assistant. Pam and Jerry have been at LRC since the beginning days in the Otter Creek clubhouse. 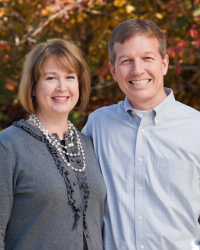